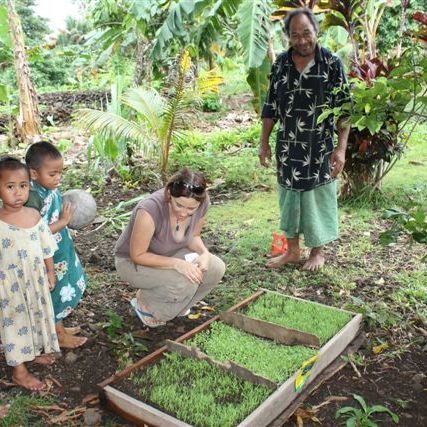 Why we need continued support from our funders

The funds we receive are used to set up and support village businesses. We provide technical, business and marketing support. We take a long-term approach to these activities so families can fully develop sustainable businesses. The income the weavers, farmers and small businesses receive stays with them so they can re-invest into their business, grow their savings and participate in modern day life.

The small successes that WIBDI has had would not have been possible without the unwavering support of our partners.

The Government of Samoa

The Government of Samoa has provided invaluable support to the development of WIBDI. Prime Minister Tuilaepa Sailele Malielegaoi has been a consistent supporter of the vision and ideals of WIBDI, as well as championing organics in the Pacific region.The Government has  provided crucial backing to the fine mat weaving and the organic program through the creation of the fine mat steering committee and the organic steering committee.

NZ Aid Development provided continuous funding for 20 years. They have been a major supporter of our organisation. We have also had a number of consultants have supported and nurtured WIBDI’s growth over many years. In particular the Marys – Mary O’Regan, Mary Jane Rivers, Mary Cretney – and Jo Lynch have provided invaluable support as part of the NZODA Technical Support project. Mary Cretney assisted WIBDI in setting up simple and robust financial systems, and has been a great help and mentor, together with her husband John, in improving management and board processes.  Mary and John have supported WIBDI way beyond the call of duty, something they have done to many other organisations in NZ and around the Pacific.

Oxfam New Zealand Executive Director Barry Coates visited WIBDI in 2003 and began a mutually rewarding relationship. This was one of WIBDI’s strongest relationships, built on mutual trust, respect and support. Rather than seeking to fund individual projects with set time frames, Oxfam NZ covered a large part of WIBDI’s capacity building costs over the last decade, helping us develop into a strong, accountable and flexible organisation that has had the ability to take advantages of new opportunities as they arise. We are grateful for this long relationship and Oxfam's support over the many years.

The Canada Fund was the first funding partner of WIBDI, providing the organisation with a much-needed vehicle for project follow-up, two computers, two printers, a photocopier and two mobile phones. Then in 1995 when WIBDI began on its virgin coconut oil project, the Canada Fund decided to fund the DME project and five families were chosen to receive training in the new technology and in small business management. Soon, these producers were producing oil of such quantity and quality that they outgrew the domestic market and an export market was urgently required.  Later in 1997, the Fund assisted with the Beekeeping project alongside New Zealand AID and Food and Agriculture Organisation. We still continue to receive project support from the Fund.

AusAID has provided crucial inputs at different stages of the life of WIBDI, notably providing funding for WIBDI’s first organic program and for the initial and subsequent NASAA organic certifications. AusAid's Pacific Leadership Support programme also assisted us to support other countries, in particular Simbo Island in the Solomon Islands. As a partner, AusAid in this initiative show great listening to cultural context, the needs of the people of they were trying to help and an adaptive mentatlity. All these elements lead to a highly sucessful programme. Our interaction with Simbo Island has become one of mutual knowledge sharing and led to increased capacities by all involved.

Special mention must go to two of our earliest Peace Corp volunteers Sally Conley and Sally Green who provided invaluable assistance in the early 1990s,  when WIBDI was  struggling to keep afloat.  Sally Conley managed WIBDI’s first office and is remembered for sitting outside a night club collecting money to pay her rent (which was supposed to be paid by WIBDI but at the time we did not have the funding), while Sally Green became WIBDI’s first Executive Director. WIBDI would also like to pay tribute to the many volunteers that have spent time working with our WIBDI team and contributing so much to the growth of this organisation.  We would never have come this far without their input.

Finally, although the list of community members that have assisted WIBDI  over the last 20 years is too long to include here, WIBDI extends our sincerest gratitude and warmest thanks to each and every one of these indispensable contributors.