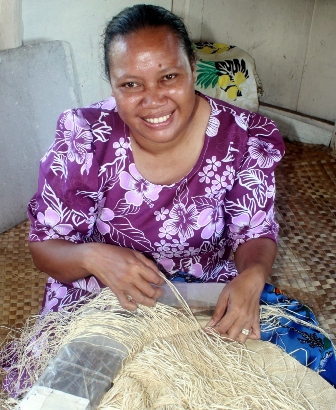 A fine mat produced by a Women in Business weaver is being touted for exhibition in Japan.

The Senri Foundation, which plans cultural events at the National Musuem of Ethnology in Osaka, Japan says the ie sae will be exhibited in the near future.

The foundation bought an ie sae, which is one of Samoa’s most prized possession, from Women in Business earlier this year.

A foundation spokesperson, Shinya Oda, says the foundation has dedicated the mat to National Museum of Ethnology.

“So it is for exhibition which introduces a life and culture of Samoa,” says Oda

The ie sae was woven by Tufutafoe weaver Apiseka Falefa, who says she is honoured that Japan is recognising a treasure of Samoa.

The ie sae that was bought was a “strip- one ie sae”, which means it is made from pandanus strips that are 1.2mm to 1.8mm wide.

At her home on the south-west coast of Savaii, Falefa’s fingers dart in and out as she pulls back some threads and pushes others forward on another fine mat.

“Some people say weaving a fine mat is too hard but I keep working at it. They just give up too easily.”

Falefa is regarded as one of Samoa’s best weavers. In national annual competitions that began in 2004, the Fa’alelegapepe, she has won a top prize five times.

Since learning the art of ie sae weaving through a Women in Business workshop to revitalise the dying art in 1999, Falefa has woven 12 Ie Sae. In 2003 she was awarded a brand new fridge as the organisation’s top weaver.

She is also one of their sponsored weavers, which means a sponsor makes small, regular deposits to Women in Business, which are paid to her each fortnight. These payments sustain her until the mat is finished, which is usually around six months.

The making of ie sae is also starting to attract more local attention because the quality of the mats is so distinctive.

Last month, Leadership Samoa took its 2012 intake to Sataua to the family of weaver of Seula Lafaele. 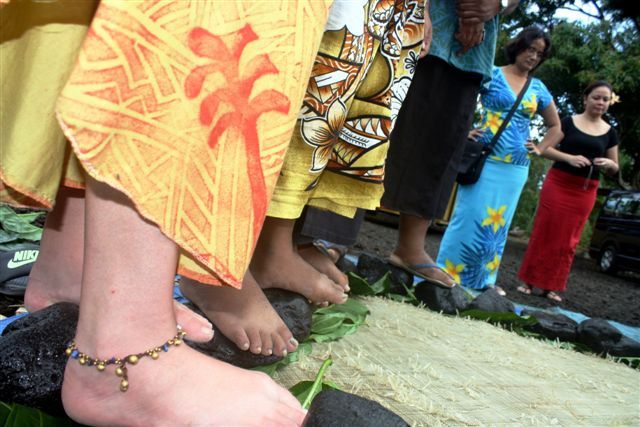 The group went to view and participate in the fa’ataelega, the washing of a newly complete ie sae.

Leadership Samoa programme manager Phaedra Moors says she took the class to Sataua because the “fa’ataelega” was one of the main highlights for the 2011 participants.

“Even us as Samoans, even the chiefs who felt they were knowledgeable about Samoan culture, had never seen the fa’ataelega done.”

Moors says that the ie sae is something that has been taken for granted without people considering how much work it is and how long it takes to make.

“You have to look at it from the big picture – this measina Samoa – and why it is so valuable to us.”

She said that once the Leadership Samoa participants saw the ie sae and met the weavers, many wanted to become part of the sponsorship scheme.

Some participants questioned whether paying for the ie sae was commercialising the practice.

Women in Business protocol manager Fuimaono Rosalia Me responded saying before Samoa had a cash economy, ie sae were sometimes given freely depending on your relationship with the family who owned the mat. “However, the mats were also traded for land, cattle and even young members of family were adopted to the family in exchange of finemat, but in these modern times, cash is fitting.”

Historian Augustin Kramer in The Samoa Islands Volume I commented that when it came to money fine mats “represent large bills and not small change”.

The fine mat’s relevance continues to be documented with Juniper Films recording its weaving for the 50th anniversary story of Samoa’s Independence. 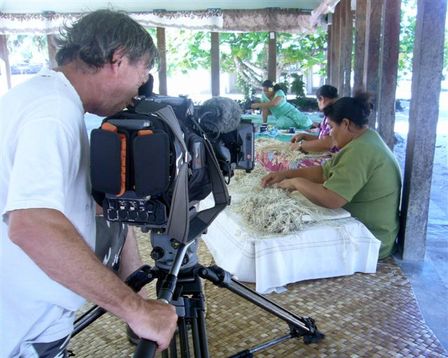 Director John Tristram said it was very interesting to see the Women in Business programme working right out in the far reaches of Samoa.

“It seems to me it is working in a very palpable way. You see the connection and they obviously feel very secure with Women in Business. The weavers are producing their specialty, which is of national importance and it is a growing movement.”

Eveliga Saisaea is similar to Apiseka Falefa, who converted from weaving the wide, hard mats to ie sae.

“The old mats were easy to sell but these are better quality.  For me it is not hard because weaving is so enjoyable for me. I get lost in it.”

Through the sponsorship programme, the family has built a new home, made improvements to the land and bought three cows.

Her story of the impact of having a consistent income was also captured in August by visiting academic, Otago University management lecturer Dr Sara Walton.

Dr Walton visited Samoa to observe Women in Business at work and to record some of its methods.

She noted how the Seisaea family has been able put their daughters through school and now university as well as keep up village, church and family obligations. Also how weaving is a family project with everyone helping to produce the weaving materials.

Eveliga Saisaea was taught by her mother-in-law and is keen to one day pass on the skill of weaving ie sae to her daughters.

Meanwhile, in nearby Tufatafoe, Apiseka Falefa continues to weave as her two teenage daughters chat in a nearby fale.

“They know how to weave hard mats but I haven’t taught them to weave the ie sae, but I will when they are old enough and I have enough time.”