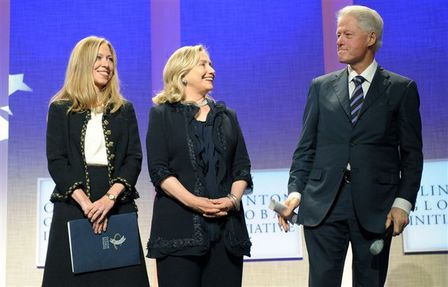 Bill and Hillary Clinton’s focus on Samoa’s Women in Business continues with the organisation being a highlight feature at the Clinton Global Initiative design workshops in New York recently.

Women in Business executive director Adimaimalaga Tafuna’i says the organisation was honoured because it shows that others around the world consider their work essential to global development.

“We were humbled and honoured when we were told that CGI wanted like to highlight Women in Business this year during one of their ‘Design Lab Sessions’ to focus on the economic advancement of women,” says Tafuna’i.

The Clinton Global Initiative (CGI) was established in 2005 by President Bill Clinton. It brings together global leaders, including heads of state, Nobel Prize laureates and hundreds of philanthropists, company and organisation heads to forge solutions to the world’s most pressing challenges.

Women in Business received an international boost earlier this year when Tafuna’i received a Global Leadership Award for economic empowerment from Vital Voices, a Hillary Clinton and Madeline Albright foundation. Ten awards are given out each year and Tafuna’i was the first woman from the Pacific to be honoured.

The Initiative showcased Women in Business as a way to spur discussion and urge CGI members to address some of the critical barriers that women face around the world.

“CGI identified Women in Business as an organisation that had been able to forge a ‘best practice’ approach to build the capacity of women-owned businesses in isolated regions of the world,” says Tafuna’i.

Promoting equality for women is not new for Tafuna’i, who sat alongside US State Secretary Hillary Clinton on a panel for the Gender Equality Dialogue as part of the Pacific Island Leaders Forum in the Cooks Islands in August.

Clinton, Tafuna'i and other Pacific leaders signed a joint statement in the Cook Islands, pledging to address issues including violence against women, limited economic opportunities and the representation of women in Pacific parliaments, which is among the lowest in the world.