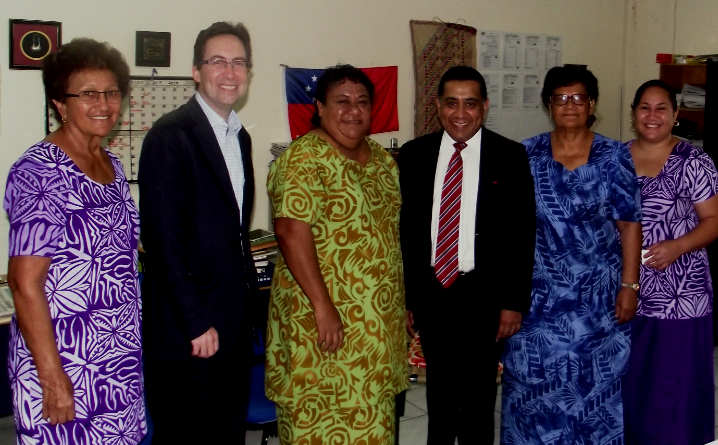 Lord Ahmad of Wimbledon, British Minister for the Common Wealth and the United Nations, paid his first visit to Samoa on the 6th till the 7th of September for the Pacific Island Forum. While in Apia, he visited Women In Business Development Incorporated (WIBDI) and met with the Non-Governmental Organisation’s President Peseta Afoa Arasi Tiotio, Executive Director Adimaimalama Tafuna’i, Associate Director Alberta Vitale and WIBDI’s Protocol & Cultural Specialist Fuimaono Rosalia Me.

Lord Ahmad heard about Women In Business Development Incorporated’s long and successful partnership with the Body Shop International and also heard about WIBDI’s decision to transition into a social enterprise.

Lord Ahmad announced the next two stages of UK Support for the development of Social Enterprise in Samoa and across the region:

“First I am delighted that the British Government funded the Active Citizens Programme and it will send several participants to Christchurch, New Zealand, for the Social Enterprise World Forum 2017 (from the 17th – 29th of September). We want to connect the Pacific Participants and their international peers, so they can learn from each other’s experience and share stories about their social enterprise journey”.

“We also want to raise awareness amongst political and business leaders at the Forum about the opportunities social enterprises provide to meet Sustainable Development Goals by using a business model to create positive social impact”.

Lord Ahmad then looked ahead to later in the year:

“I am also pleased to announce that the first Active Citizens programme in Samoa will take place in November this year. The programme will work with partners around the globe, the British Council Trains participants in the skills and knowledge they need to affect change in their communities”.

In the Pacific, the focus will be on social enterprise, youth leadership and gender equality. Participants will include social entrepreneurs and young leaders from Samoa, Fiji, Tonga, the Solomon Islands and other Pacific Island nations.