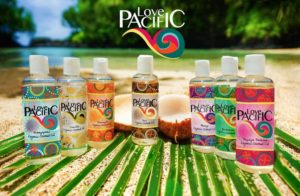 A new brand of Samoan Coconut Body Oil and Soaps called Love Pacific has been developed in partnership between Women and Business (W.I.B.D.I) and Janet’s.

Love Pacific has launched with seven different fragranced Coconut Oils and Soaps and has been a labor of love according to Janet’s Manager, Chris Sablan.

“Pacific Islanders have been using the purest forms of coconut oil to nourish and beautify their bodies for millennia,” he says.

“Love Pacific represents a continuation of this tradition using Organic Virgin Coconut Oil from Samoa. Our mission at Janet’s is to showcase and bring to people the best of Samoa and the Pacific’s Cultural Heritage. Love Pacific carries on this tradition…”

This technique preserves all the natural nutrients which is why Samoan Coconut Oil is revered for its purity, healing and beautifying properties. Samoan Virgin Coconut Oil forms the foundation of Love Pacific products.

The way the virgin coconut oil is organically extracted using traditional “cold press” methods is meant to ensure the highest quality of Oil to give the best results. Organic farming and production means that the trees are grown in their natural environment in the fertile volcanic soil of Samoa.

The nuts from the trees are carefully selected to ensure quality. Farming Organic means supporting the environment and producing the best possible performance for customers.

“The Team at Love Pacific believes that supporting and promoting the beauty and health benefits of Samoan Virgin Coconut Oil through this grassroots project helps to strengthen the sustainability of coconut farmers and the environment.” Mr. Sablan said.

Women in Business and Janet’s Partnership

Lisha Sablan the Creative Director of Janet’s states that “Janet’s has always wanted to work closely with Women in Business (WIBDI) and to now partner with them on this Coconut Oil initiative is exciting for all of us."

Lisha noted that Janet’s and WIBDI were a natural fit as both shared the core mission of developing grassroots industries and communities.

This includes working with and assisting with crafters or farmers to bring local products to market and ensuring that the end customer knows of the authenticity and benefits of these products.

WIBDI has been instrumental in energizing the organic farmers for Love Pacific and for its other projects and Lisha stated that “our Love Pacific Products are made by WIBDI which means that they involve as many local farmers as possible in the production of Love Pacific Oils and Soaps. Our passion for the product has led to new and exciting opportunities for all the people involved in the process. We are particularly greatful to Adimaimalaga Tafunai, Alberta Vitale and Louisa Warner and the team at WIBDI for their inspiration and hard work”, Lisha stated.

Mr. Sablan noted that WIBDI is an organization well known in Samoa, and said “you have a group that complements its values of community development with high standards of production. There is a reason why a global company like the Body Shop sources Virgin Coconut Oil all the way from Samoa. This is due not only to the special nature of our Coconut in Samoa but also the excellent standard that WIBDI and Samoan farmers extract the essence of the Coconut for use.”

The coconut tree is the tree of life and the use of every part of it has been key to the survival of Pacific people for thousands of years. Samoan Coconut Oil is well known for its healing abilities and health benefits.  Sablan noted that “people have long  used Samoan coconut oil as protection against aging and the elements.

However what people also desire is a connection to the natural world in all its purity and power.  Coconut Oil is an elixir from nature. It is sensual. It is beautiful and fun. And it holds within it the essence of the Pacific.  Long  before science told us of the benefits of coconut oil our Pacific people knew of its magic and now we have the opportunity to continue in this tradition and share it with the world.”

Organically grown and made with Love in Samoa.