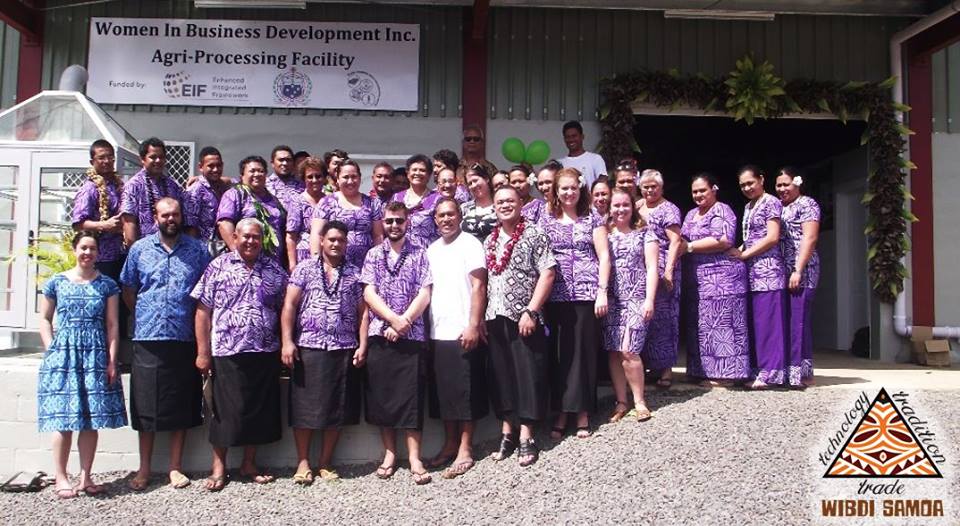 The newly built warehouse is a project fully funded and supported by Enhanced Integrated Frame Work - EIF, The Government of Samoa and Partners from Trade, Commerce & Manufacturing Sector - TCMS.

Women in Business Development Foundation - WIBDF was a Non-Governmental Organisation launched back in 1991 and founding members of the women led organisation that were able to be present on the day - Viva Meredith, Michelle Meredith, Litia Hudspeth and Adimaimalaga Tafuna'i – are continuously dedicated to helping communities in Samoa.

Founding members of Women In Business Foundation in the 90’s

Pictured: Current board members, Adi, Peseta and Sheree together with Fuimaono - with some of the founding members of WIBDI

Throughout the years these women led the foundation and have continued to strengthen the different constituencies that do not earn any form of sustainable financial income and has ever since,  continued to better the livelihoods in vulnerable communities, through fair trade, with its vision and mission.

The vision was to create an eased barrier for vulnerable families in Samoa to be able to contribute fully to their own development, the development of their community through income generation, job creation and participation in the village economy.

The mission is to provide and empower these families with knowledge and skills, opportunities, providing access to finance and markets.

26 years on, the renamed organisation, Women In Business Development Incorporated, has accomplished many attributes and continues its dedication to strengthen communities in rural areas of Upolu & Savai'i by accessing local and international markets through fair trade.

The current president of Women In Business Development Incorporated, Peseta Arasi Tiotio, opened the celebrated event with a ceremonial speech; she has been an active member of the organisation since 1998 and is continuously overwhelmed to be a part of such an influential organisation that has greatly impacted several families, provided that they receive a source of revenue.

President, Peseta Arasi Tiotio, also cannot fathom the achievement of this far-fetched milestone, taking part in the Blessing of the Agri-Processing Facility, and becoming an ambassador for the organisation has been one of her greatest achievements.

After the delivery of madam Presidents speech, long time supporting Prime Minister, Tuilaepa Sailele Malielegaoi, enlightened the extent with a few words and shared some of the humble achievements the women led organisation has seen in its last twenty six years – 26 years, through the revival of the fine mat and realising its true traditional value.

The honour was then passed to Reverend Nu'uauasala, to bless the building with a prayer, followed by this, Sheree Stehlin, Vice President of Women In Business Development Incorporated; closed off the special occasion with an intangible storyline of history and shared some of the obstacles the organisation faced while the warehouse was unable to undergo construction procedures.

This newly built Agri- Processing Facility is aimed to assist with the development of the Farm the Table Project (FTTP), " WIBDI’s weekly promoted Organic Basket " - a youth unemployment approach, linked together with some of the 500+ organically certified villages and farmers in both Savai'i and Upolu, a supply guarantee system created by the organisation and fully funded by UNDP Samoa.

The project was launched in late November, 2016 and the program works  in conjunction with the Organic Warriors Academy, an innovative program that is offered by WIBDI – and also fully funded by UNDP Samoa and other active sponsors such as the Ministry of Community Social Development – MCSD  , Samoa Development Goal Fund – SPDG and Samoa National Youth Council SNYC.

The facility is a game changer for WIBDI’s local food supply systems ready-installed, in union the weekly Organic Basket program. The program is connected to strong and ethical rural development principles, in Upolu and Savai’i and this newly introduced factory will hugely benefit several youth, providing job opportunities and a source of sustainable income.

This elusive milestone would not have been complete without the continuous support from International Partners, C1 Espresso, OX FAM New Zealand, Volunteers Study Abroad from New Zealand (VSA - NZ) and The Body Shop UK,  in playing a fair  part during this special event also by attending the Blessing of the Agri-Processing Facility and also providing extra - small sized gifts for our give-away-gift bags, handed to all of the honoured guests.

Women In Business Development Incorporated Staff, Board and Management are very humbled and cannot express in words the gratitude received from every participating individual that took time out of their busy schedule to attend this milestone celebrated occasion for WIBDI and there are greater things to come in the near future – watch this space Samoa!