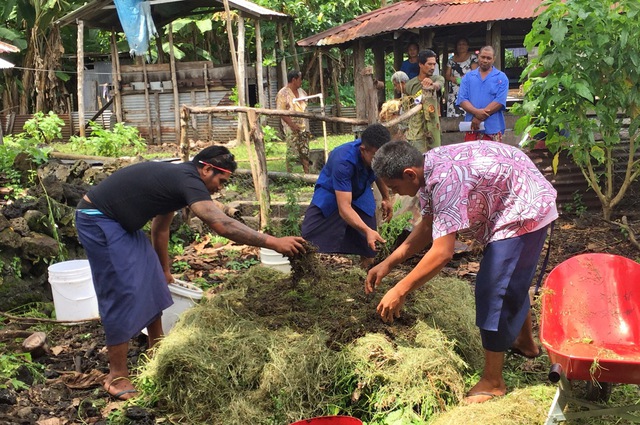 National co-ordinator of the Forestry and Protected Area Management (FPAM) Afamasaga Sami Lemalu said organic farming and improving the livelihoods of people living around the protected areas were important to the project. FPAM is implemented by FAO and funded by the Global Environment Facility.

“The turnout was really good and I am very happy to see the fair representation of both genders in the project,” said Lemalu. “Women and men have been very supportive to carry out the activities in their own villages.

The Savaii trainings took place on March 25 and 26 and included Matautu villages Avao, Salei’a, Fagamalo, Lelepa, Vaipouli, Satoalepai, and Taga and Gataivai from the South west coast. More than 80 people attended the two trainings in Savaii. Last year there were also three trainings held in Apia where 30 people attended.

Women in Business Development executive director Adimaimalaga Tafunai said most farmers who learn the importance of traditional and organic farming to the environment make positive changes to the way they farm.

“We were very happy to work with FAO on this project because it helps more families in Samoa make a good living from their organic farms.”

Each village was given packets of vegetable seeds, which included lettuces, carrots, cabbages, melons. onions and various herbs.  There will be a follow-up training at the end of March to support these farmers.

Farmer Tiatia Samu from Gataivai said he learned about protecting Savaiii’s uplands as well as healthy eating, healthy soil and how to make compost.

Alofa Tu’ulofai from Avao said more farmers should farm organically. “The main thing I learned was how to look after our environment and us as human beings through farming, and it is important to do it now before it is too late.”

The project, which covers Fiji, Vanuatu, Niue and Samoa, is now under review. For Samoa, there are still village activities to take place.