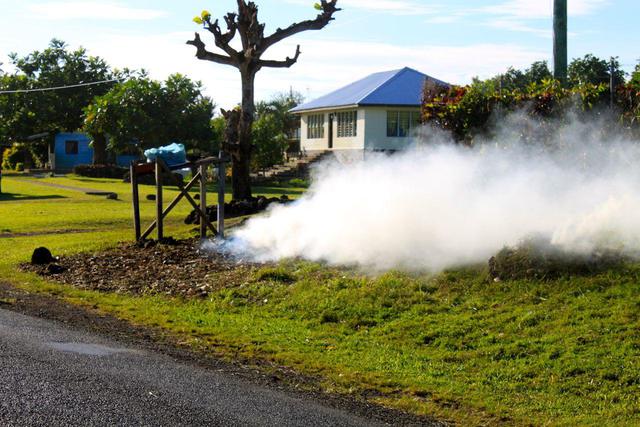 As the nation celebrated Father’s Day holiday on Monday, many took the chance to tidy their gardens but that led to piles of leaves and grass – essentially plant food – going up in smoke.

For many Samoan households, it has become standard practice to burn garden waste instead of using it for mulch or composting.

Not only is it a waste of natural, free resources to help people’s gardens produce bigger and better vegetables and give them a better return at the market, it also contributes to climate change through carbon emissions.

As part of the Offset Islands 2014 campaign to offset the carbon emissions from the Third International Conference on Small Island Developing States, there is an opportunity to focus on what Samoa can do in terms of showing leadership in the climate change area.

Last year 15-year-old Seminario Vili from Saleimoa wrote about his experience of learning about composting and mulching garden waste instead of burning it. Seminario was part of A2C2 (Action Against Climate Change) project.

Seminario and his Maluafou College team – Otto Kohlhase, Seloa Lale, Kirita Paepae – tried different ways to raise public awareness including a flash mob, which became one of the most popular videos in the project, t-shirts, a blog and a rap. The webpagewww.facebook.com/OffsetISLANDS2014 will feature Seminario’s rap later this week.

Through learning and being an advocate for composting and mulching, Seminario and his family stopped burning all plastics, which they now take the roadside for rubbish collection, and compost and mulch all their garden and food waste.

A2C2 was a PACMAS initiative showcasing “voices of youth” to raise awareness about local climate change solutions. The project was a partnership between PACMAS, the Australian Government Department of Environment, the Australian Broadcasting Corporation, and AusAID, and implemented by Apidae Development Innovations.