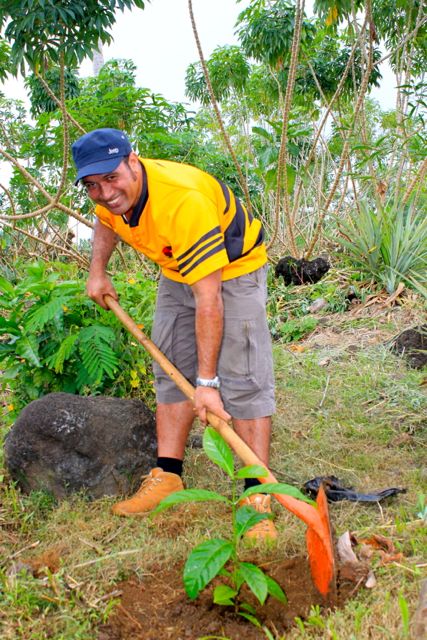 Samoa is calling for citizens around the world to help offset carbon emissions as a result of the largest global meeting to be held in the Pacific Islands.

It is being led by Women in Business Development Inc and has received the backing from Prime Minister, Tuilaepa Sa’ilele Malielegaoi.

In a letter of support, Prime Minister Tuilaepa says he “commends this milestone initiative by the Women in Business Development Inc (W.I.B.D.I) in engaging our village communities and the people of Samoa, the Pacific and the world at large via awareness programmes, replanting of trees and rekindling of organic farming to offset carbon emissions”.

Women in Business Development executive director, Adimaimalaga Tafuna’i, says there are environmental repercussions from all the carbon emissions despite green measures government had put in place such as solar-powered conference facilities.

The non-governmental organization, which has a network of certified organic farms, is asking people to people to plant a tree, compost or mulch to offset carbon emissions.

“If all our farmers, our gardeners actively plant trees, compost and mulch organic material, we can make a difference,” says Tafuna’i.

“What’s more, we are also asking other nations – our Pacific neighbours, our Caribbean friends and Indian Ocean colleagues and citizens around the world – to join our efforts.

“Most people know that trees are key to offsetting carbon emissions. Composting and mulching are also powerful techniques to lock in carbon and they have the added benefit of improving how water interacts with soil, making it more resilient during droughts and floods, and improving garden produce.”

Tuilaepa, who heads the Samoa Organic Advisory Committee and the Pacific High Level Organics Group, says the government will support the campaign and work collaboratively with the nongovernmental organizations and other organisations to minimize the carbon footprint of the S.I.D.S meeting.

It has also set up a Facebook page for people to upload their pictures and videos. At the end of the campaign, a tally of all the trees, composting and mulching efforts will added up to see approximately how much carbon has been offset.

Samoa Observer editor Mata’afa Keni Lesa says with the global meeting attracting more than 3,000 people to the island nation including heads of government, United Nations delegates and business leaders to the small island nation, there will be a sharp spike in air travel and energy consumption and consequently carbon emissions.

“We need to act collectively. Our role as media is to spread the word and get people thinking and acting in ways that will make our planet more resilient.”

According to climatefriendly.com, 3,000 people flying from Los Angeles Apia, Samoa – a distance of 7,800km – generates 11,000 tonnes of carbon dioxide. By contrast on average, one broad-leaf tree will absorb about 10kg of carbon dioxide a year.

“There is more carbon being produced than our earth can process,” says Tafuna’i, “and we are seeing the effects with the heating up of our earth, rising sea levels, ocean acidification and more extreme weather events.”

In April, the World Meteorological Office reported record highs of carbon concentrations in the atmosphere in the Northern Hemisphere.

During the month-long campaign, climate-change and carbon-offsetting initiatives that are taking place through the Secretariat of the Pacific Regional Environmental Programme (S.P.R.E.P) will also be highlighted.

S.P.R.E.P has been working with the Samoa Ministry of Natural Resources and the Environment to help make the Samoa conference environmentally friendly.