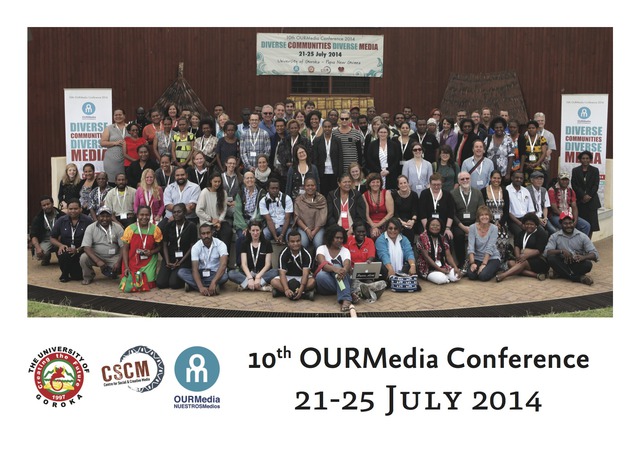 Communities need to tell their stories, speak in their own voices and move themselves from the margins to the centre.

That was one of the key messages for the OURMedia: Diverse Communities, Diverse Media international conference in Goroka, Papua New Guinea held last week.

More than 150 academics, grassroots practitioners and media gathered at University of Goroka to discuss the need for indigenous communities to tell their stories to bring about positive social change.

Welcomed with a traditional call from Manus elder Papa Musau, the gathering was also addressed by the University of Goroka Vice Chancellor Dr Gairo Onagi.

Dr Onagi said that communication was essential to development and used the example of promoting HIV Aids awareness in PNG.

Keynote speaker Dr Clemenica Rodriguez opened the conference talking about how there are centres and margins in communication, which recognizes how power and resources are distributed unequally.

Dr Rodriguez is a professor in the department of communication at the University of Oklahoma. She also co-founded the OURMedia network in 2000.

“We cannot understand poverty and underdeveloped unless we talk about centres and margins and inequality.

“And every margin has its own personality, idiosyncrasies and produces its own information and communication needs.”

Dr Rodriguez says communication practitioners need to look at the unequal distribution of power, economic, political, and access to resources.

She also expanded common notions of what is media.  “Media is any strategy humans use to do something, to have a voice – graffiti, hiphop, dance, tattoos. Anything that allows the community to interpret the world in their own terms.”

Dr Rodriguez criticized many communication for development initiatives that were based on designing templates and then applying them, as formulas, in different countries.  She says if you take that approach “You might as well burn the money.”

In 2011, Rodriguez, a Colombian native, wrote Citizens’ Media Against Armed Conflict: Disrupting Violence in Colombia. She described how the country had become synonymous with drugs and militias due to disproportionate media focus, yet more than 80 percent of the population has never waged war or taken up arms.

She presented a short video produced by three boys from a coca farm that gave insight to their daily life as sons of farmers.

She says that in this case technology is being used to disrupt stereotypical images and allowed the community to present an alternative version of who they are into the public sphere. This is an example of how community media is used to move versions from the margin to the centre.

Dr Rodriguez also advises to “retrain our eyes”. She says things that look poor may not be. An outhouse often means poverty but it may work best for that lifestyle.

“Need to diversify the way we think of wellbeing – and not conform to the Western definition of development that is tied to modernity.”

She adds that it is important not to just receive messages from the outside but to be the ones sending the messages.

She says another key is young people, who can learn at school how to play with media technology and become future directors, editors and interviewers.

“When I attended the OURMedia conference in Sydney, I saw how academics and practitioners were coming together to bring about social change and justice.”

Dr Thomas says the conference also presents an opportunity to learn from each other and expand PNG’s connections.

*Faumuina Felolini Tafunai is the media specialist for Women in Business Development Inc in Samoa. Faumuina presented a talk on designing mobile apps for an organic Farm to Table programme. She is part of a Pacific contingent that travelled to the OURMedia conference sponsored by the Pacific Media Assistance Scheme, PACMAS.