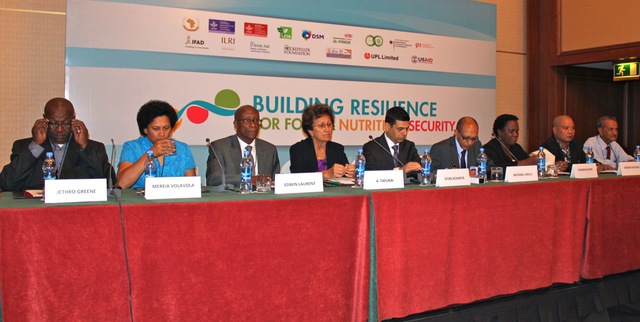 Caption: Experts from the Caribbean, Pacific and United Nations discuss the challenges of sustaining resilient food systems in small island economies at the Building Resilience for Food and Nutrition and Security conference in Ethiopia.

For the first time, Pacific and Caribbean voices were heard at an International Food Policy Research Institute conference – and it won’t be the last.

Asked why the Pacific and Caribbean regions had not been included before, Chief of staff and conference director Rajul Pandya-Lorch says IFPRI are mandated to work where there is the greatest concentration of populations.

However, through the support of The Technical Centre of Rural and Agricultural Co-operation (CTA), a Pacific and Caribbean delegation of private sector, civil agencies and government sector were able to attend the conference in Ethiopia themed on “Building Resilience for Food and Nutrition and Security”.

“Each of the conferences builds on including more actors,” says Pandya-Lorch. “We saw that with the South Asia conference where this time when we announced this conference, we got an immediate phone call from South Asia with an organization wanting to run a side event.

“That’s why CTA with their experience and networks are so important. And we would hope to amplify that participation at the next conference.”

This year’s conference attracted more than 800 participants – 300 more than Pandya-Lorch had anticipated – as well as 21 side events, twice the number of the last conference hosted in Delhi.

The key themes that emerged from the panel was: higher consumption of locally grown produce contributed to better health; farmers needed to own more of the value chain to become more productive and profitable; and that there needed to be more co-operation within and between the two regions.

Gibson Susumu, Food Security Technical Officer at the Secretariat of the Pacific Community, says the Pacific Islands are not often engaged with international research organisations.

“There needs to extra support so our voices can be heard, and so we can get the support we need to meet our challenges especially with respect to food security.”

Susumu says the Pacific also has successful research that can assist other international researchers.

“I was sitting at session earlier and in some ways we are already ahead in some research areas. For example, we are already trialling climate resilient crops at the community level in different countries, which is just being discussed in one of the sessions,” says Susumu. “Our small scale allows us to go from research trial to implementation quite quickly.

“However, we recognize that we need to continue to boost research capacity in the region.”

He added that there are success stories in the region that needed to be scaled up.

Maurice Wilson is the head of the Resource Mobilisation, Monitoring and Evaluation Unit at the Caribbean Agricultural Research and Development Institute. CARDI operates by mandate of the heads of the Caribbean Commonwealth countries

Wilson says the IFPRI conference focuses on resilience for food security and that is basis of the work done at CARDI.

“Being at this conference allows us to connect with other institutions and share information.  It is essential that we do this because these institutions work in regions within which crop varieties may demonstrate tolerance to pests and diseases. These varieties may be tested and validated for adoption within the Caribbean.”

He adds that collaboration between the Caribbean and Pacific has been increasing over the past two years and is being strengthened by the EU Intra-ACP Agricultural Policy Programme.

Other research institutions also stand to benefit as the Caribbean and Pacific share their experiences and knowledge, according to Wilson.

“We see great advantages in forging relationships and networking with potential donor sources, partners, and collaborators.”

Conference director Pandya-Lorch says IFPRI stage each conference to be a catalyst. “You see this momentum. I feel we contribute by bringing these actors together to have informal conversations.”

Among the speakers on the programme are a spread of international agricultural and development agencies. There are also multi-national private sector players such as Nestle and DuPont.

Pandya-Lorch says private sector needs to have “the space to engage” and move the conversations forward. She adds that corporate social investment aside; change needs to occur at the core business level.