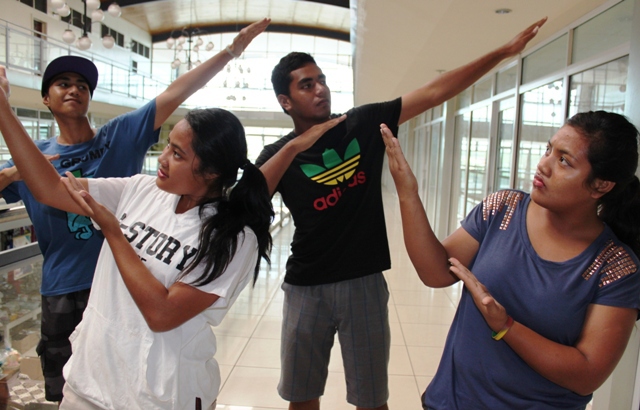 Calling all want-to-be flashmobbers – a small group of Maluafou Secondary School students are asking for your help to promote their climate change message.

On Saturday (October 5), four students will lead a flash mob at SNPF Plaza at 9am. The group has posted their dance on various Facebook sites including Women in Business Development, A2C2 (Action Against Climate Change), Digicel and Bluesky so that people can go online and learn the dance moves.

“Don’t burn the plant food is our message,” says student Seminario Vili. “We want Samoans to fa’apala (mulch) their fallen leaves and grass cuttings rather than burning them because this way we can make our soil stronger against the effects of climate change such as droughts and floods.

The Year-11 student is asking for people to learn their dance from the Facebook sites.” Even if people just do the chorus actions that would be awesome,” says Seminario.

Women in Business Development media officer Faumuina Felolini Tafunai, who has been mentoring the group alongside Salai Faatupu Amituanai from Red Cross Samoa, says the students have been working on an on-line media story to explore climate change and organic agriculture.

“They wanted to do a dance, which was choregraphed by Kirita Paepae, and other parts of the project include a T-shirt designed by Otto Kohlhase, and video interviews carried out by Seloa Lale.

“One of the key objectives of the project was to answer the question: What are we going to do NOW? So each student has started a fa’apala project at their homes and are mulching garden waste instead of burning. They are also talking to their families about how organic agriculture systems can help Samoa counter climate change effects,” says Faumuina.

A2C2 (Action Against Climate Change) is a youth-led project creating compelling media across the Pacific on climate change. It involves five Pacific countries: Vanuatu and Samoa (in country media production), and Kiribati and Tuvalu (via the University of the South Pacific hub campus in Fiji).

A2C2 is a collaboration between PACMAS (Pacific Media Assistance Scheme), AusAID, the Australian Government Department of Environment and the Australian Broadcasting Corporation (ABC), and implemented by Apidae Development Innovations.