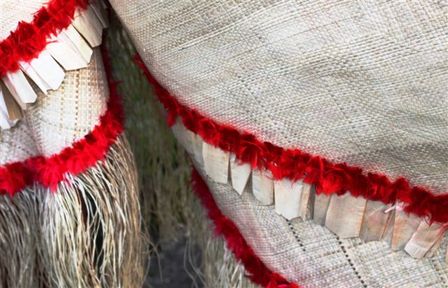 Reverend Tonu Mauafu set the tone for this year’s Fa’alelegapepe National Finemat Competitions with his words: The Bible refers to an inner light and this light reflects what you do, reflects the beauty of everything you do.

Indeed, Samoa’s finest mats swayed gently through the air as they were paraded in the 2013 Fa’alelegapepe in Savai’i then Upolu.

Prime Minister Tuilaepa Sailele Malielegaoi congratulated all the women saying that this year the public had witnessed an exhibition of quality and now quantity.

Tuilaepa said ten years ago the Government took the initiative to ensure that future generations will have fine mats to meet their cultural obligations and also to do away cheap, low-quality mats. 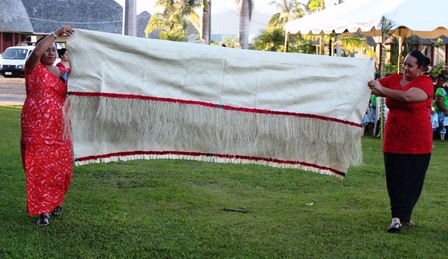 He added that it had been quite a challenge to learn the skills of weaving an ie sae, and he congratulated the thousands of women who had continued this Samoan measina.

Samoa Qualifications Authority now recognises weaving with a qualification, said Tuilaepa, which acknowledged the art form in the same way other cultures overseas did with their treasured arts.

The Prime Minister has now issued a challenge that for any group that weaves 10 finemats in one year, they will receive $5000 on top of any other prizes.

The four top Tosi Tasi winners from Savai’i are all sponsored weavers receiving a weekly income on the Women in Business finemat programme.

Fuimaono Rosalia Me says she wanted to acknowledge and thank all the women who over the past decade have been working hard in the programme, which has Tosi Tasi, Lua and Tolu.

“With our sponsorship the weavers have managed to develop their families and also send their children to university. We have continued to insist in high quality from our weavers and now they consistently gain prizes at the annual awards.”

Fuimaono said that although some women had left the sponsor scheme, they now led village weaving groups and managed their own marketing. These groups also provide an opportunity for other women to earn an income.