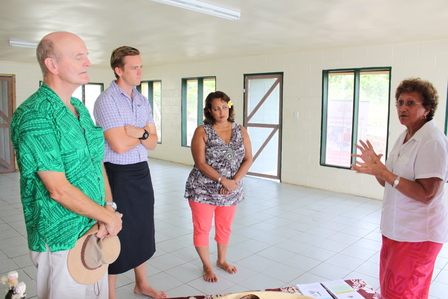 Solid and efficient. That’s how the Australian High Commissioner describes the new Women in Business production house at Nu’u.

During his official inspection, High Commissioner Stephen Henningham yesterday knocked on the walls of the building that received $27,000 from his office’s Direct Aid Programme.

“It’s impressive,” said Henningham. “The new building offers the great advantage that now the banana drying process can be done on one site as opposed to before when the separate parts of the process were done at three different sites.”

Henningham said the focus of the Commision’s Direct Aid Programme is to assist village communities. “We also want to support innovative non-governmental organisations such as Women in Business who are working to provide a way for families to earn money where they live with the things they are already growing.

“The programme is about getting revenue flow into communities so they can afford the basic costs that all families face, especially in education and health.

Women in Business board chairperson Sheree Stehlin said the building had been a real bonus for their Nu’u site, which now included an organic nursery as well as the fetau oil processing, and an organic virgin coconut oil production unit.

Aside from inspecting the new building, Commissioner Stenningham took a turn at pressing virgin coconut oil.

“Over the past year,” said Stehlin “we have really seen the Nu’u site expand its activities and with the new building, it has given Women in Business the opportunity to become more efficient.

“We are extremely grateful to the Australian High Commission in Samoa.”

Women in Business has also received $3500 from the Pacific Horticultural and Agricultural Market Access (PHAMA) program – an AusAID-funded programme that seeks to facilitate market access in Australia and New Zealand for products from Pacific island countries. This PHAMA funding was to help improve all aspects of the dried banana production including food safety.

Stehlin said the Australian government had been very supportive of the organisation’s work. “We also have an Australian Youth Ambassador for Development, Melanie Scanes, in our team. Melanie is a valued staff member working on organic certification matters.”