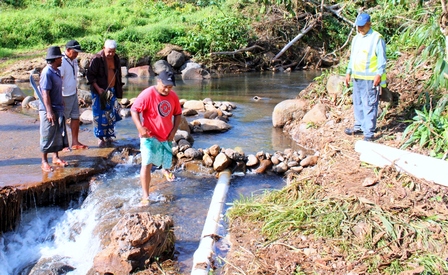 A water assessment in the wake of Cyclone Evan has revealed a patch of clear water on an otherwise murky waterscape.

Oxfam New Zealand’s water and sanitation advisor Andy Thomson spent four days assessing Samoa’s water needs after the cyclone. With most of Upolu without water, Thomson and Oxfam partner organisation Women in Business contacted the Independent Water & Waste Schemes Association (IWSA), which supplies 17 per cent of all water to Samoa.

IWSA project officer Leiataualesa Tofae Alailima said that all the member schemes were quickly able to make temporary repairs to their water systems with the help of people from the villages.

“The main thing is currently all our 32 member schemes have water being supplied to their people. The repairs we made were temporary but they worked,” he said.

Leiataualesa said to make lasting repairs IWSA would need to replace many six-inch and eight-inch pipes that were damaged or floated away.

“We will also need technical assistance, as well as heavy-duty chainsaws and proper workboots for the village crews to clear all of the river and access road debris,” he said.

Women in Business visited the Letogo water catchment to survey their repairs and damage.

The day after the cyclone Letogo Water Committee reacted swiftly, building a small catchment with rocks further down the river and tied a filter on to an existing pipe so that water could supply the village below. Leiataualesa said although the village now has water, there are massive repairs to do upstream where fallen trees collected and ripped away whole sections of pipe. A house that also used to sit above the catchment area was completely destroyed.

Thomson also investigated what assistance was required to get Upolu's water mains flowing.

“Water and sanitation is a big issue. The Samoan Water Authority has their hands full. Pipes and water treatment plants are down. Some secondary plants are operating and some water is being trucked around, but there’s very little rainwater being caught by tanks,” he said.

“The priority now is water harvesting and storage for drinking, washing and toilets. It’s also important for people to realise that when there is water, they need to ration it, because that water is scarce. The evacuation centres are overloaded, so there’s a real risk not only of water supplies being insufficient, but of waterborne diseases breaking out,” Thomson said.

Oxfam assisted the Samoa Water Authority after the 2009 tsunami by using trucks to deliver water to families that had been displaced in the first weeks after the crisis before rainwater was able to be captured.

Thomson, who was in Samoa on a water monitoring programme when the cyclone struck, also met with Samoa Red Cross, the Disaster Management Office and Samoa Water Authority during his visit.