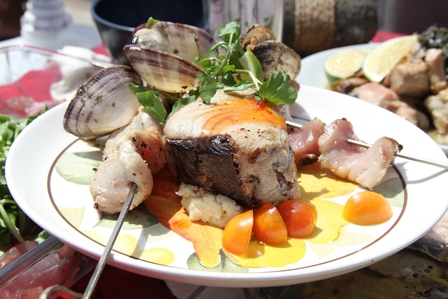 Chef and author Robert Oliver and his team booked a day sail on Friday to film Gaualofa chef Lolesio Patolo cook and present a meal.

Oliver, along with co-author Tracy Berno, won best cookbook in the world at the Gourmand World Cookbook Awards in 2010 for Me'a Kai: The Food and Flavours of the South Pacific.

"When I was told Gaualofa had returned and had a wonderful chef on board, I couldn't resist the opportunity to meet him and sail on the canoe."

He was accompanied by photographer Shiri Ram and film crew Zoomslide booked a day sail on Friday to film Gaualofa chef Lolesio Patolo cook and present a meal. 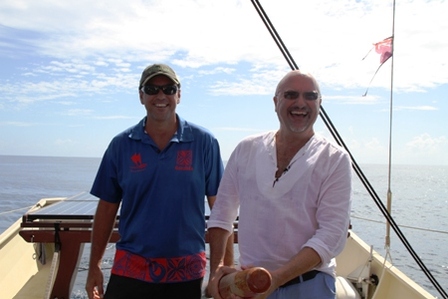 Gaualofa captain Nick Henry said it was important to seize opportunities that promote the canoe and its crew.

"Working with Robert Oliver is about investing in the future of Gaualofa when you think about the exposure it will gain."

The Prime Minister said he was keen to support the va'atele once a formal plan had been presented by the voyaging society.

At a crew function, the society also honoured its captain who is due to return to his home in the Cook Islands.

Henry was presented with a to'oto'o and fue as symbols of leadership by society member Leilua Ame Tanielu.

"On the va'a I make use of whatever is at hand but I still want to produce beautiful, healthy food for the crew."

Patolo took on his voyage some home "essentials" including Samoan's Own Chilli Sauce, koko, and virgin coconut oil.

Oliver said those ingredients were exactly the products he was trying to promote through www.truepacific.com.

He added that sailing on Gaualofa was a special experience for him and his team and thanked Women in Business for organising it.

Production company Zoomslide is gathering footage of Oliver’s food travels, which can be seen at www.realpasifik.com.