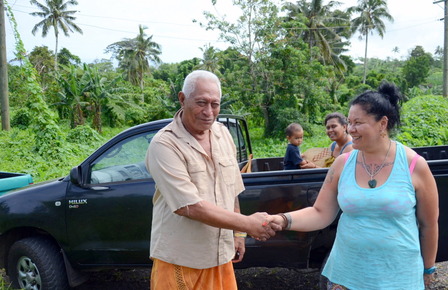 It’s a big black pick-up truck but really it so much more than that.

The pick-up was bought with funds donated by the artists from the Tautai Contemporary Pacific Arts Trust in New Zealand in response to the tsunami that hit Samoa and Tonga.

Lonnie Hutchinson and Nikki Hastings- McFall were two of 69 artists who raised just over $87,000 from an auction that was originally Hastings-McFall’s idea. The pair came to Samoa during August as part of a Creative New Zealand artistin- residence programme.

Recently, Hutchinson, who comes from the villages of Poutasi and Malie, visited an organic farm in Saleapaga with Women in Business Development Inc, which received $60,000 from the Trust and used part of it to buy the black pickup.

“We asked around and we kept coming back to Women in Business. And now that I have seen what they do with my own eyes, it confirms we made the right choice,” says Hutchinson.

“The work they do is not easy. It requires commitment, patience and it requires sturdy transport because the villages are spread out and some of these roads are pretty rough.”

Women in Business executive director Adimaimalaga Tafuna’i says the pickup is perfect for carting coconuts for farmers who have no transport and for collecting buckets of coconut oil.

“There are just so many uses for the pick-up. I don’t know what we would be doing without it.

“And the surplus funds after buying the truck paid for a few additional visits for our counsellors who helped families, and our staff deal with the trauma of the tsunami.”

Hutchinson met with organic farmer and beach fale owner, Lolofie Tele Falea. After meeting at Lolofie’s beach fale business, Loloifi Ocean View, the group travelled inland to the new Saleapaga settlement. Lolofie’s property is 150metres off the road and inaccessible by vehicle, providing an insight into the challenges some Samoan families and Women in Business field officers face.

After walking through a neighbouring plantation, the group reached Lolofie’s new home bordered by taro plantings and banana trees.

The farmer often sells taro at the market when they have a surplus. He says the family also grow cocoa, fetau and ta’amu.

“I would like develop the beach fale business and also build a proper road to my property,” Lolofie told the group.

After discussions with Women in Business, Lolofie was to look at what other crop options were available to him and asked for a followup visit from the organisation.

Both said they would like to continue their connection with Women in Business and the organic farming initiatives in Samoa.